If you're new here, you may want to subscribe to our RVer's Newsletter or check out our main website. Thanks for visiting!

RV solar panels are an investment. It takes some time for them to pay themselves off and even longer to save money using them. Luckily, most RV trips will provide plenty of sunlight for them to soak up.

Many of the disadvantages you’ve heard about solar panels are myths. Some of them, however, have truth to them. Read on to separate the fact from fiction as far as RV solar panels are concerned.

Why Are RV Solar Panels Worth the Cost?

Despite common belief, solar panels work great in colder areas with less sunlight. In fact, they operate more efficiently in colder climates than they do in warm ones. Germany, for instance, produces the third most solar energy out of any country despite both its smaller size and its temperate climate (it gets 10 percent fewer annual hours of sunlight on average than Seattle).

Though solar panels don’t produce as much energy on cloudy days, they still produce around 25 percent as much energy as they would on a sunny one. Furthermore, regions like the Pacific Northwest that are known for getting less sunlight still get nearly as many hours of sunlight year-round, which is what actually matters.

Their cost is dropping as their efficiency rating is increasing

The first silicon solar panel effective as an energy source was created by Bell labs in 1954 with an efficiency of just six percent. Since then, technology has allowed us to create solar panels with over 30 percent efficiency. During that time span, and especially in the last 10 years, the cost per watt of energy has plummeted.

A decade ago, a standard, six-kilowatt solar panel would cost nearly $53K (more than the average RV)! Now, that same solar panel costs under $19K, and that’s before a federal tax credit is applied. In other words, solar panel technology is advancing in much the way we’ve seen computers, TVs, and phones advance in recent years. They’re continuing to become cheaper despite rapid advances in how powerful they are.

RV solar panels almost never require anything other than a light surface cleaning. Generally, you can drive with them located in the same spot throughout your entire journey. If you do need to move them, they are light and portable, so readjusting them or taking them down is also hassle-free. This makes them great for dry camping or boondocking. 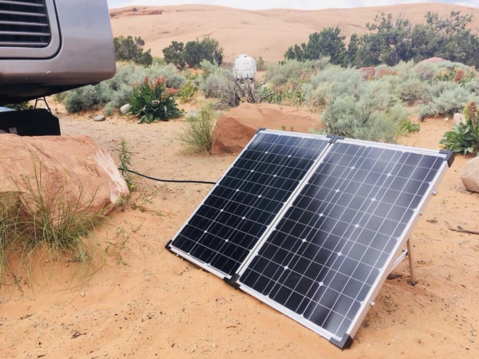 Why Aren’t RV Solar Panels Worth the Cost?

Most RV parks have electric hookups

While it’s nice to have RV solar panels as an extra source of energy, many campgrounds and RV parks have electric hookups included in the cost of an RV site or available for a small upcharge. It doesn’t make sense to pay for 50/30amp hookups that you never need to use. If you don’t plan on doing much dry camping or boondocking, you’re never going to be using the solar panels enough to make back the cost.

Generators are your better option if you’re dry camping someplace that requires your RV’s air-conditioning to be on for most of the day. Running a class A RV’s AC exclusively off solar energy would require its entire roof to be covered in solar panels and a 1,000Ah lithium battery bank. And that’s assuming you left your AC off for most of the day. Not only is that tremendously expensive, you’d have to ration your energy use just to have enough. A generator, on the other hand, can handle this workload much more easily.

You (practically) need to RV fulltime to justify their cost

If you never plan on RVing fulltime, you’re probably never going to fully make back the money you spent on your RV solar panels. Those who only go on a few RVing trips a year won’t ever reap their long-term benefits. Short-term campers looking for alternative sources of energy for dry camping are better off investing in a generator. Though they aren’t environmentally friendly like solar panels, generators are much easier to set up.

RV solar panels can be a great choice for supplementing other RV energy sources, like RV hookups and generators. However, we don’t recommend attempting to run your RV solely off solar power, nor do we recommend using them in areas with extreme temperatures.

Panels are best utilized by following temperate weather as you travel, moving north and south to avoid using your AC and heater as much as possible. When you think through the investment of solar panels and do tons of research before you buy them, you’ll be happy with both your energy and financial savings.

The RoverPass Reservation Management System is built to help you save time and money with cloud-based reservation management software. Accept reservations online, over the phone, or in-person and track your availability in one central system.

Latest posts by RoverPass (see all)